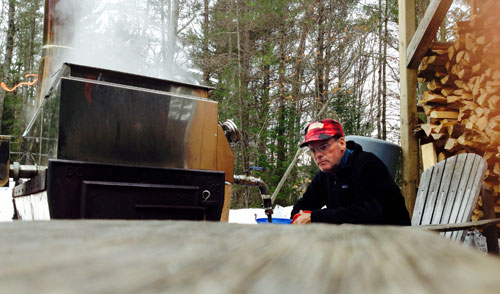 Soon after Wayne Krangle’s son, Corporal Chuck Krangle, returned from a tour of duty in Afghanistan in 2007, he passed on a special book to his father: Fifteen Days by Christie Blatchford, in which she describes the incredible spirit, valor and determination of men and women serving Canada in Afghanistan.

Wayne was so moved by the content that he decided to contribute to the ongoing welfare of the wounded soldiers from this recent mission; soldiers who are now facing a life challenged by both physical and emotional disabilities.

With an inspired heart and determined mind, Wayne turned to the hundreds of sugar maple trees on his country property in the Haliburton Highlands, just waiting to be tapped, and got an idea! After being taught the tricks of the trade, acquiring specialized gear and camping out for months, he tapped into nature’s delicious gift, Canadian maple syrup.

This ‘liquid gold’ was brewed outside the cabin in an open fire, the old fashioned way like the Pioneers used to do it. The exposure to all the elements, including snow, rain and fire gives this maple syrup a unique, rich and robust flavour with a hint of smoke. It takes 40 litres of sap just to make one litre of maple syrup. It is a whole lot of work, but nothing compared to serving on behalf of Canada in far-off places.

All of the proceeds from the sale of his maple syrup, less the costs of production, are going to the Wounded Warriors fund, specially created to help our Canadian heroes and their families deal with their extraordinary issues.